To read or not to read? (#4): Dr. Stephen Summerfield: Saxon Army of the War of Austrian Succession and the Seven Years War. Uniforms, Organisation and Equipment.

As you all know, I'm working on my new Saxon army for the Seven Years War. For that, I needed a good source for uniforms, flags etc. Most of the interested of the period know the Kronoskaf very well, as a good source for that topic. Checking the chapter about Saxons, I noticed that there is missing some information about the units, therefore I asked some questions on the Facebook groups and today's book was recommended to me. Here is my review, from the wargamer point of view. 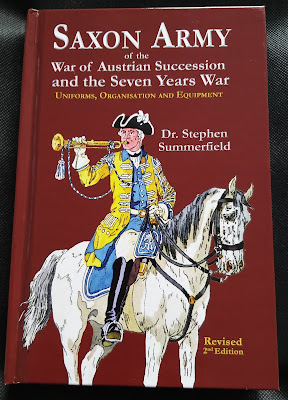 The book is published by KEN TROTMAN PUBLISHING and that is its 2nd revisited edition.

The author describes the Saxon army and its unit during the years of 1735 till 1763, in reality, it started with some units much earlier. We got everything: all infantry, cavalry or artillery units. Their history, changing in their uniforms, flags etc. Also, we are receiving a brief service history. Dr Summefield put the main focus on three conflicts: the War of Polish Succession, the War of Austrian Succession and the Seven Years War. In total, we have 590 uniforms, 75 flags, 90 equipment details. A lot!

2. What is good for us, wargamers in that book?

I will repeat 590 uniforms, 75 flags, 90 equipment details. Every unit that existed during the period (most of that units are not described in the Kronoskaf) has someplace in the book. Amazing source, if you paint Saxon army. It also gives few Orders of Battle, to help to organise our forces. 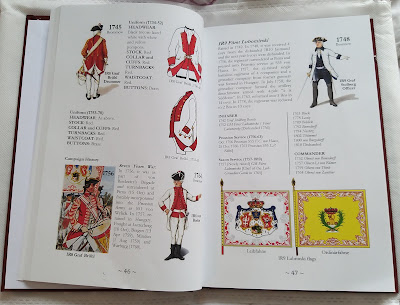 Sadly yes and they are serious. There is many misspellings in the work, some of them very funny like for example title of one of the chapters: M1758 Saxon Infantry Fags (!). I also find many mistakes when the author used the original words, especially Polish, for example, his Towarczys, which should be Towarzysz and that mean Companion.

If you are preparing the Saxon army, absolutely yes, if you are interested in that period yes.

I give it 5 on 6, because of the misspellings, which not supposed to be found in that kind of book.