To read or not to read? (# 1): Despite Destruction, Misery and Privations... by Michał Paradowski.

Today I'm starting a new thread on my blog and that will be my reviews of the books.  In the following parts, I will focus on the usefulness of these publications for wargaming. Today my first positions: Despite Destruction, Misery and Privations... The Polish army in Prussia during the war against Sweden 1626-1629. by Michał Paradowski. The book is part of Century of the Soldier 1618-1721 series of Helion&Company. I would like to say massive sorry for my Polish readers, but today's post will be only in English. 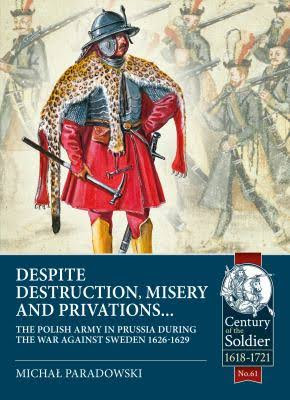 This book presents us the Polish army during the war against Sweden 1626-1629. Showing us its structure, the way the army was created, how it was paid (or mostly not) and finally how that army fought. The whole book is divided into 5 parts. The first is about the Polish Military System in the first quarter of the 17th century, what were its main components. The second part telling us about the commanders during the war, the way the army was recruited, the way it was organised. The most interesting part for us the 3rd part. Telling us about the formations, its equipment, tactic and organisation. Part 4th is about the financial part of the war, mostly about of lack of the founds, food and pretty much everything. In the part 5th, we learn about the battles, skirmishes and sieges.

2. What is good for us wargamers, in that book?

I could say a lot. Firstly the author talking about all formations presented in Commonwealth army. So we have Winged Hussars, cossack style cavalry (which Michał call cossack, which is correct in translation and more accurate to the sources, but I prefer the term introduced by the creators of By Fire and Sword rules), reiters (western type cavalry), Arkebuseria (as the author says: formation (...) unique to Poland, a rather unusual blend of 'Eastern; and 'Western' influences.), western type infantry, dragoons, Polish-Hungarian infantry, Wybraniecka infantry, artillery, engineers and the fleet. If any of that terms are unknown to you, do not be worried, as every formation is described in the best possible way. How it looks, how it fought, what weapons it used, how the units were created and many others. Also, the book has a lot of pictures from the period and from museums or private collections, which should give you a better picture. The best part of the book is the colour plates made by Sergey Shamenkov. He did an amazing job and I believe that those plates will be an inspiration to many future armies. That book will be helpful to any future games scenarios as it gave us a very deep look over the units structure, numbers, commanders etc. Also tells us a lot of the units morale and their willingness to fight etc. So many, many pluses.

Yes, few, but minor. Firstly the author gave us a lot of descriptions of smaller skirmishes, sieges, but omit larger battles. I can understand why he did it, to show us why this war was so unique in the history of struggles between Polish-Lithuanian Commonwealth and Sweden, but a little more space for those three battles would give us a larger picture of the conflict and also some better ideas for game scenarios for larger battles. Secondly, the tactic of Polish units is also omitted. I can understand that there is almost a lack of sources but almost doesn't mean there is nothing. In a few words, the author could write about the main differences between Polish and Western European warfare. As the example, I can give the words of von Arnim about the way the Polish cavalry charged the enemy (in less dense formation than his reiters). Those are minor things which I found missing, but this is my personal opinion.

Absolutely yes, if you wargame 17th century and yes if you not. I do not find any better sources in the English language about the Commonwealth military of that period. In that small book (only 210 pages, which I took in one evening), you will find everything, what you need. I hope that we will get more positions of that period in English, so the general knowledge of the Polish Lithuanian Commonwealth military and history will be much more widespread than it is now.